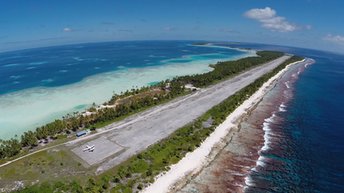 Ultimate guide (December 2022)
Penrhyn is the largest and most remote atoll in Cook Islands. It is also known under the name of Tongareva. Many years ago, there were many black pearls farms, but as for now nothing remains about it. There are two villages (Omoka and Te Tautua), but most of the 77 km long coastline are just uninhabited islets (motus) with palms and occasional sandy beaches. It's almost impossible to buy anything in local shops - no food, no goods. Therefore, it is better to bring all supplies with you. The place is rather interesting, but very uncomfortable as well. It is worth a visit only in case if you have a lot of money and a lot of free time. Shore and seabed: broken coral, sand. [edit]

There are no hotels on the atoll, but the villages have rooms for rent. This is that rare case, when it makes sense to think about bringing your own tent. However, most of the tourists arrive by yachts, so they don't care about renting rooms.

Fly to Rarotonga international airport (RAR), next fly to Tongareva airport (PYE). A return flight from Rarotonga starts from about US$1000. This is very unreliable option due to frequent flight cancellations.

Several times a year, there are also small boat charters coming from Rarotonga. These are also expensive, but still much cheaper compared to the air fares.

The best time to visit Penrhyn Atoll is a dry season from June to December.