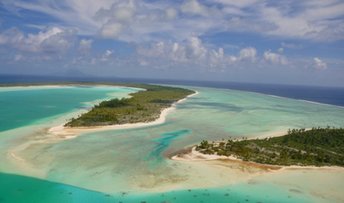 Ultimate guide (January 2023)
Tupai is a small atoll located 20 km to the north of Bora Bora in French Polynesia. This is a private property, so this is probably a good idea to obtain permission in advance. However, it's not clear where to obtain this permission. The atoll looks beautiful both from the air and on the ground, but absolutely have no good beaches. There is mostly shallow water with a "concrete" bottom of coral origin. The coast line is also not as beautiful as one might expect. So there's no reason to get here breaking all barriers. Shore and seabed: coral pebble, sand. [edit]

There are no hotels on the island, while the only permanent staff is a security guard. Don't even think about that bungalows, that you have seen on the photos.

In a theory, you may try to make a secret trip by boat and to spend the night in a tent. But do you really need it? You'd better stay on Bora Bora, since it has an excellent choice of good accommodations from US$90 to US$3000 per night.

Fly to the airport of Bora Bora. Next get by boat to Tupai island.

It is important, that you travel at perfect weather, and the ship should be under the control of an experienced captain. Don't even think about sailing on your own in a small boat rented in the lagoon of Bora Bora. Even if the weather is fine, the open ocean is usually very rough. But in case of wind, it's just a suicide. And anyway, you won't have enough fuel to get back.

You should not also rely on the airport available on Tupai island. Definitely, it is not for usual tourists. And it's not possible to find a plane ready to fly here.

The best time to relax on the island of Tupai (or Bora Bora as well) is a dry season from April to September. The peak season is August, when there is no rains. And this is also the vacation season in North America and Europe.

We recommend to think about September. It has the same weather as August, but the crowd of tourists gets much rare since the beginning of September!