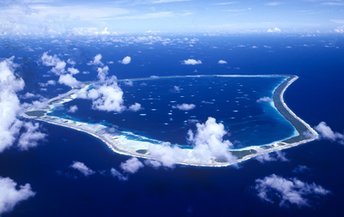 Ultimate guide (January 2023)
Manihiki is a large atoll in the Cook Islands. It is known as a major center producing black pearls. The inner lagoon has many tiny islets hosting pearl farms. There are usually no any kind of vegetation, but just depressing buildings. As for the beaches, you won't find anything like that on the atoll. Though there are a lot of palms looking very scenic. It is not worth to buy black pearls, since now this is just a fake. Large plastic balls are placed inside the mollusk, and taken out after a few months only, - just after the surface of the ball is covered with a thin layer of plaque. This is not a real pearls! For the price of such a "pearl", it is better to buy a great Chinese necklace. Anyway, it looks the same. Shore and seabed: stones. [edit]

Manihiki Lagoon Villas is the only accommodation option on the island. Since there are no competitors, one should not expect low prices, nor advanced service. However, this is quite an option for such low key destination.

Transportation across the lagoon is possible by boats sailed by the locals. In most cases, it is possible to negotiate the fares, since there are no many wealthy tourists (unlike Bora Bora).

The best time to relax on the island of Manihiki is a dry season from June to December.