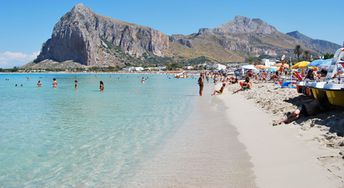 Ultimate guide (September 2020)
Sicily is the largest island in the south of Italy. There are many good beaches (though not the best in Europe), as well as historical attractions - mostly from the Ancient Greece. Climbing to Etna active volcano is popular among extremals. Shore and seabed: sand, stones. [edit]

Sicily is a poor region, like most of southern Italy. Therefore, hotels and restaurants are much cheaper than in the north of country. However, popular tourist areas may be overpriced in the high season, so it is strongly advisable to book much in advance.

There are four major airports in Sicily, so it makes sense to choose one that is closest to your hotel: Palermo Airport (PMO), Catania-Fontanarossa (CTA), Comiso (CIY) and Trapani (TPS).

Sicily can be also reached by train from Rome / Naples. It is longer and often more expensive than air flights, but you get the opportunity to see the south of Italy from train window. When crossing the Strait of Messina the wagons are disconnecting from each other, crossings the water by the ferry, and next chaining back.

There is also good ferry connection between the mainland Italy and Palermo town of Sicily. But this transportation option is even more expensive and longer than plane and/or train.

The best time for a beach holiday in the island of Sicily is the warm period from June to November. August is a peak of tourist season. While September has almost same warm sea water, but without crowds.