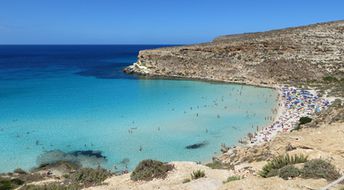 Ultimate guide (October 2020)
Lampedusa is an Italian island in the south of the Mediterranean - not far from the African mainland. It was famous for its beautiful beaches, but now it's mainly known as an entry point to Europe for illegal migrants on their way from Tunisia. Beach and seabed: sand, stones. [edit]

Due to migration crisis Lampedusa hotels are slightly cheaper than on the other islands of Italy. However the whole journey to the island will be rather expensive, as air fares raised after many airlines stopped to fly here.

Fly to Lampedusa Airport (LMP). Next hire a taxi or just walk on your own, depending on how your hotel is far from the airport. Recent years, the number of flights to Lampedusa was greatly reduced. However, the island still has few lowcost airlies operating in summertime.

The best time for a beach holiday in the island of Lampedusa is a warm season from June to October.

Island's tourist industry suffers from African illegal migration. Thousands of migrants are potentially dangerous to travelers. Obviously, you will feel more safe somewhere in Sardinia or Sicily. However, you may still fly to Lampedusa and have a good vacations.