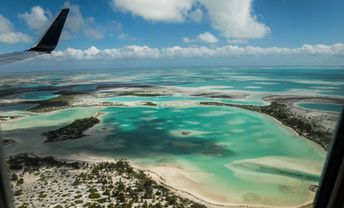 Ultimate guide (December 2022)
Kiritimati (Christmas Island) - one of the most unusual atolls in the Pacific Ocean. There is not one, but dozens of inland lagoons, which are quite different from each other. Most of them are totally unsuitable for swimming, but there are few lagoons with beautiful beaches. Most tourists come to Kiritimati for fishing, so beaches are always empty. Beach and seabed: sand, stones. [edit]

There are several hotels near the airport. There are also many guesthouses in the inner lagoons, which often don't even have a website.

Fly to Kiritimati International Airport (CXI). Next take a taxi.

Keep in mind that planes from Fiji and from Honolulu fly the same day - once a week. So the minimum stay period in Kiritimati is a week.

Any time of year except for April. This month is the most rainy.

It was same nuclear explosions in Kiritimati many years ago, which still prevents mass tourism from developement. Nevertheless, now the risk of radiation exposure is minimal, even in the midst of an explosion.