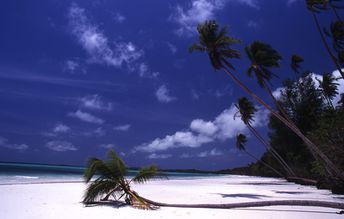 Ultimate guide (December 2022)
Kai Kecil - island with the best beaches in Indonesia. White sand, high palm trees and almost no tourists, - it's a best recipe for a tropical paradise. Keep in mind that in 1999-2003 there was a civil war between Muslims and Catholics. Now only segregation reminds about that. There are purely Muslim or purely Catholic villages. Almost all of the best beaches are located near the Catholic settlements. Shore and seabed: sand. [edit]

There are about a dozen of beach hotels in the island. The best hotels are located in Ohoililir village. Prices in hotels are low despite of a pretty decent level of service.

Fly to Kai Kecil airport (LUV). Next hire a taxi.

Recent years, due to the increase of tourist traffic a new airport was built and some extra flights were added. Therefore, the accessibility of the island has greatly improved.

High season on the island is the period from June to August, when it is relatively cool and no much rains. The worst time to visit the island is the rainy season from November to April with the peak of rains in December-January.