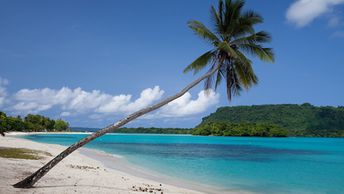 Ultimate guide (August 2020)
Espiritu Santo is a large island in Vanuatu - with some of the best beaches in the country, including tiny island resorts. On the other hand, there are not much of authentic features, which we usually expect from Vanuatu, - like wild tribes or volcanoes. But this is a true beach paradise - like it should be in Oceania. Shore and seabed: sand, stones. [edit]

In general, the hotels in Espiritu Santo are quite expensive, - like everywhere in Vanuatu. However, it is possible to find a lot of budget accommodation options with room's rates starting from US$50 per night, and sometimes even cheaper.

The best time to relax on the beaches of Espiritu Santo in Vanuatu is a dry season from July to October.