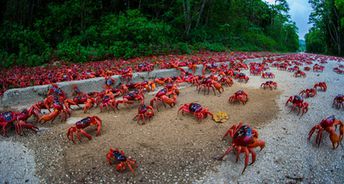 Ultimate guide (January 2023)
Christmas Island is an Australian island in the Indian Ocean off the coast of Indonesia. There are no good beaches, but you may swim in the rocks in a calm weather. The island is famous mainly for the seasonal migration of red crabs: this is a unique phenomenon. Beach and seabed: rocks. [edit]

Most of the hotels are located in the northern settlement called Flying Fish Cove. In general, the island has no many hotels, and these are expensive.

Fly to Christmas Island Airport (XCH). Regular flights are available only from the Australian Perth town. There are also occasional charters from Singapore, Jakarta and other major hubs of Southeast Asia. However, it's hard to find such a flights.

The flight from Perth next follows to the Cocos islands (Keeling), which are a perfect beach destination and even more interesting than Christmas Island.

The best time to travel to the Christmas Island is a dry season from July to November. The migration of red crabs usually happens during the period from October to December.

Attention! There is also another Christmas Island: it's also known as Kiritimati Atoll in the Pacific Ocean. Unlike its Australian companion these are really superb islands with perfect beaches, lost at the end of the World.