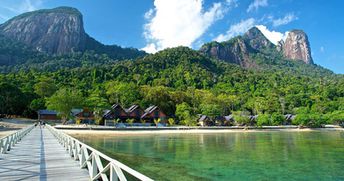 Ultimate guide (September 2022)
Tioman is a popular tourist island in Malaysia. Despite many good reviews, the beaches are far from the best, - for example Perhentian islands are much better. So Tioman can be only interesting to the people of Singapore, as the distance between that points is very short. Shore and seabed: sand, stones. [edit]

There are no large hotel chains in Tioman. Almost all accommodation options are inexpensive (room below US$50 per night) beach guesthouses with decent conditions.

Fly to Kuala Lumpur international airport (KUL). Next take a bus to Mersing, and follow to Tioman island by Bluewater Express ferry - 2 hours per way.

Once upon a time, it was possible to get to Tioman island by a regular flights or by speedboat, but now these options are not available. Flights were stopped in 2014 due to insufficient demand, while speedboats were banned after some deadly crashes.

The best time for a beach holiday on Tioman island (like the entire eastern coast of Malaysia) is a dry season from April to July.