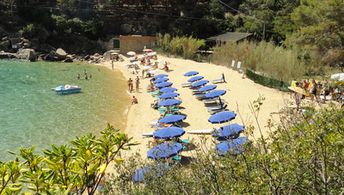 Ultimate guide (May 2021)
Giglio is a small island in the province of Orbetello, Tuscany. There are several sandy beaches, but most of the coast is rocky with perfectly clear water and good snorkeling. For some time the local attraction was the ship of Costa Concordia, thrown near the coast after a famous disaster. However, the ship was taken for repair in 2014, and as for now, nothing reminds of that incident. Shore and seabed: sand, stones. [edit]

There are not many hotels on Giglio, and these are quite expensive. However, there are no budget accommodation options on the Tuscanian coast, and a room for US$100 per night is considered to be quite reasonably priced.

Fly to Rome (airports of Fiumicino-FCO or Ciampino-CIA) or fly to Pisa international airport (PSA). Take a train to the station of Orbetello - Monte Argentario. Next get by bus to the stop of P. S.Stefano Porto (routes 39/O, B/O, C/O) and take a ferry to Giglio island.

The nearest beaches can be reached by walking for about half an hour. In addition, the island has a bus service, as well as taxis and boat tours along the coast.

The best time for a beach holiday in the island of Giglio is a warm period in the summer half of the year.