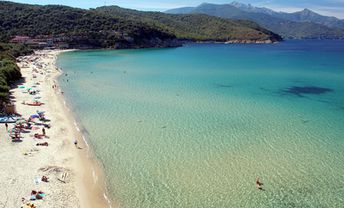 Ultimate guide (February 2020)
Elba is a small island near the coast of Tuscany in Italy. The beaches are rather mediocre, and overcrowded during the high season. However, the island is green with mountains covered by scenic hiking trails. Historically, Elba is notable for Napoleon was here during his first exile in 1814. Shore and seabed: sand, stones. [edit]

On the island of Elba there are a lot of beach hotels to suit all tastes. However, rooms' fares are rather expensive in most cases, - like in the mainland Italy.

There is also ferry service connecting Elba island with the mainland, as well as with the neighboring major islands. However, ferry is often more expensive than plane. So the ferry makes sense only if you want to get with your car.

It is convenient to move around Elba by bus. As for the rental car, many popular beaches usually don't have free parking space.

As elsewhere in the Mediterranean, the best time for a beach holiday on the island of Elba is a hot period from July to September. In August, sea water is warmest, but beaches extremely overcrowded. It is best to come here in September, if you can take a vacation that time.