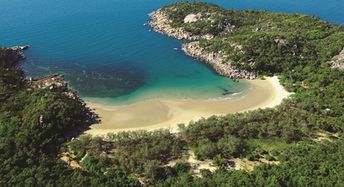 Ultimate guide (August 2022)
Magnetic is an island near the Townsville of Australia. Despite some episodic palms and tropical beaches it looks more like a place for walks through the hills and secluded bays. Pretty koalas often can be seen on the trees. Shore and seabed: sand, stones. [edit]

Magnetic island has no many hotels, but there are also no many tourists. As a result, there are always free rooms, and fares are rather cheap in general.

From Townsville Breakwater marina take a ferry to Nelly Bay of the Magnetic island. You may roam around the island by bus, or by bycicle, or just walk on your own.

The best time for travel to Townsville in Australia is a dry season from April to November. That time sea water is relatively cold, but on the other hand you won't suffer from tropical rains.