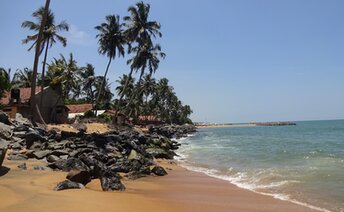 Ultimate guide (November 2021)
Sri Lanka - country in the northern Indian Ocean. The island has few good beaches, but most of the beaches looks extremely depressive. The main attractions located inside the island are giant Sigiriya rock and Adam's Peak mountain. Shore and seabed: sand, stones. [edit]

There are lots of hotels in the island, and they are very cheap in general.

Fly to Colombo International Airport (CMB). Next follow by taxi, by bus or by train.

From December to March, and in July-August. Rest of time it is the rainy season in the island.

For many years, most of the northern and eastern coast of the country was the scene of civil war between government army and rebels. However, only small area in the north of the island remains dangerous now.