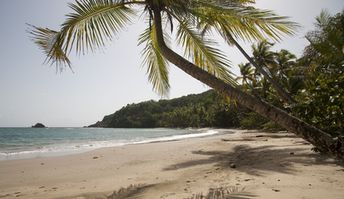 Ultimate guide (January 2023)
Dominica is an island in the Caribbean being still unspoilt by the mass tourism. The beaches are rather mediocre here. The south-west coast is mostly stony, while the Atlantic side usually suffers from strong waves. However, the north end of the island has several great beaches of a world-class, which are still a best kept secret. Hurry up, as the hotels definetely will be built here, and this beautiful place will be turned into another tourist attraction. Shore and seabed: stones, sand. [edit]

Dominica has enough hotels - everywhere on the island. Unfortunately, most of these are not presented over the Web, or it is hard to book them online. However, tourism industry is rapidly developing in the country, so all of these problems should be solved soon.

Fly to Douglas–Charles airport (DOM) or fly to Canefield airport (DCF). It is best to rent a car right from the first day of your holiday, since both taxis and public transport are very poorly developed.

The best time for a holiday on the beaches of Dominica island is a dry period in the winter half of the year.