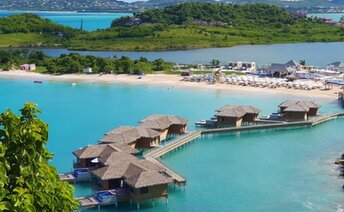 Most hotels on the island are rather expensive - even those located far away from the beaches. Given the high level of service such prices are quite reasonable in most cases. Relatively low cost accommodation options are also available, but it is desirable to book well in advance in high season.

Fly to Antigua international airport (ANU). Next hire a taxi or take a bus / minibus. It also makes sense to rent a car for the entire duration of your holiday.

Public transport is relatively well developed, but unfortunately has bad coverage of some important tourist areas. It is best to travel by bus to the south-west coast - see route #22.

Almost all routes start in the capital town of St. John's, so you'll often have to change buses. Bus routes can be found here.

Any time of the year. High season is considered to be the period from November to May. But we recommend the season of hurricanes - from June to October, which so horrifies American tourists. The probability of hurricane is small, but there are no crowds this time, hotel prices are cheaper and the sea water is warmer.